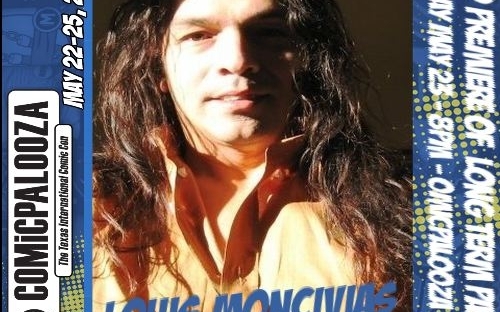 “This film reminded me how hard some folks work on chasing their dreams,” Louis Moncivias told me after playing the role ‘Pony’ in the sci-fi gangster comedy Long Term Parking.

“It reminded me how many behind the scene hurdles have to be jumped, gone around, gone under or busted through to make them come true. It gave me an insight of what passion can accomplish when you set your mind to it.”

Moncivias was talking about bringing Mike Kearby’s novel Long Term Parking to life as a feature film. The film premieres at Houston’s ComicPalooza May 23rd at 8:00pm. He talked with me by phone from his home in San José, Costa Rica.

LM: This was a risky script! It pushes the levels of making some people feel uncomfortable with its content. But when I truly thought about it, I figured, hell, that’s what makes it an interesting script.

ES: In the novel your character hangs out in the parking lot of an abandoned strip mall. The film places you on a horse ranch.

LM: Kristull Ranch in Austin, Texas was the perfect location for our scenes plus it fit my character perfectly. We had tons of different location on the ranch to choose from along with a tractor that was needed for one scene and plenty of pretty horses for background players.

ES: Tell me about your character in Long Term Parking.

LM: ‘Pony’ was a bad guy of sorts and skimming peyote profits from under the nose of ‘The Man’ Joey Sacs (Joel Lane Hudgins). If I tell you anything else, I’ll give away the surprises.

ES: Was this the first film you’ve made with director Paul Bright?

LM: No. The first was at my place, Poquito Ranch in Austin. I got wind that he was looking for a location to shoot a couple scenes for Goliad Uprising. I am always trying to help the independent film community and gave him run of the place. He asked me what I wanted in return and I said a couple bails of hay for the horses will work. That man showed up in a 4 door sedan with bails of hay in the back seat! Do you know how long hay stays in the carpet and interior of a car? Poor guy! That’s when I knew I liked him and we’d become fast friends.

ES: It’s too bad you can’t make it up for the film’s premiere at ComicPalooza.

LM: Yeah, I can’t get away from my current project right now. But Paul tells me he’s planning a screening in Costa Rica at the end of July.

ES: That should be a blast.

LM: My hat is off to everyone who sets their mind to making a movie. Indie filmmakers exemplify courage at its best.

You got something to say about this? Cancel reply

Don’t Be a Dummy. Check This Out.