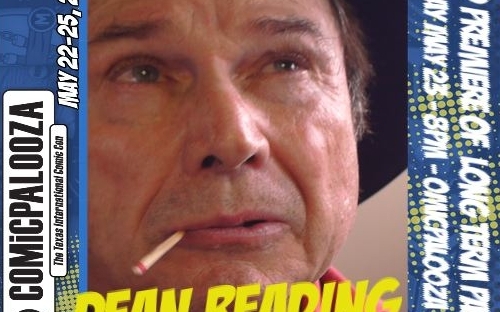 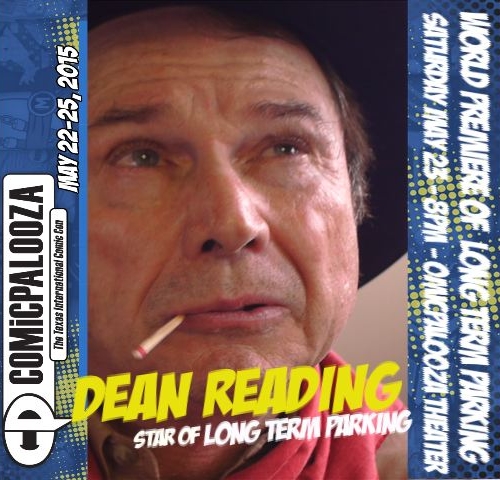 Stunt man, director, actor and cowboy Dean Reading rode into town – literally on a white horse – to talk with us about making the movie Long Term Parking which premieres May 23rd at the ComicPalooza Theater in the George R. Brown Convention Center. I caught up with Reading at Chisholm Trail, the local BBQ joint in Lockhart, Texas that actually has a railing for tying up his horse.

DR: No, he’s not. And I wasn’t planning to play him as a cowboy, but that’s what the director (Paul Bright) wanted, complete with the hat and bandana.

GW: The movie takes place in Fort Worth. But your name sounds like an Italian mobster.

DR: Well I guess now he’s an Italian Cowboy mobster. Carlucci is a totally disreputable character. He’s a business man, but wow, what a business.

GW: As the guy who runs the Long Term Parking Lot he probably sees a lot of parked cars.

GW: It’s quite a racket.

DR: The script was irreverent you bet – but also very different from most things I’ve worked on, and that makes it all the more enjoyable as an an actor.

GW: How did you get involved in the film?

DR: I’ve known Paul for many years – I first met him shortly after I moved to the Lockhart area after living in Grapevine, Texas for 15 years. I went to an audition for a play at the Baker Theater. We’d run into each other at the grocery store every so often. He asked me to do a video read for the film.

GW: A lot of auditions are done by video now.

DR: I was able to do it at the saloon on my ranch. I literally dismounted my horse, tied him up at the hitching post in front of the saloon and walked in to do the audition shot by my neighbor Donnie Barkmeyer (a cinematographer and rodeo photographer.)

GW: You filmed in Smithville, about an hour from your ranch. How was the shoot?

DR: I wish all the shoots I worked on were as much fun. The other actors were fantastic – I worked with Tony (Bottorff), David (Young), Gary (Mahmoud), and Natasha (Straley). It was a really enjoyable experience. I’ve worked with many actors in the past, both as an actor, and also as a crew member. I must say working with these individuals was a highlight.

GW: We’ll be seeing you on the silver screen at the premiere in downtown Houston May 23rd. Are you planning to ride to the convention center on horseback?

DR: In Houston traffic? Are you kidding? I have more respect for my horse than subjecting her to that.

One thought on “Dean Reading Saddles Up to Another Comedy”

You got something to say about this? Cancel reply

Don’t Be a Dummy. Check This Out.